The first title of Bulgakov to go with our two installments of the work-in-progress presented at the Highways and at FuryFactory Festival in San Fnracisco, is We Play Devil's Advocate (Variation # 50).
Details are on our Calendar.

A year later, what we are looking at For almost a year, ARTEL has been investigating the life and works of Mikhail Bulgakov (1891 – 1940), predominantly known in the West for his novel “The Master and Margarita”. Bulgakov abandoned medicine for a writing career during the Tsar’s abdication of the throne and the Bolsheviks’ attainment of supreme authority over the People’s Revolution. Bulgakov was a self-proclaimed mystic and satirist who never waivered in his legitimacy as an artist as well as his deep belief in the right of all artists to express themselves without censorship. In the late 1920’s, the Soviet Revolution spread its authority over all areas of life, especially the arts, in order to shape a new man. Many artists were forced to bend to the will of Soviet ideology and those who did not write soviet socialist realism were exiled and/or executed. Through a complex relationship with Joseph Stalin, Bulgakov remained alive in Moscow and working at the Moscow Art Theater; however, he was essentially reduced to hack work and a life of internal exile as none of his plays were premiered in a form suitable to his artistic integrity, his early books were removed from the library shelves, his new writings were unable to be published and the living conditions with which he was to work under created a paranoid episode in his own mind. Despite the increasing Terrors of 1930’s USSR, Bulgakov continued to write, believing one must work until the last moment of consciousness. His work is not only a testament to the artistic spirit but, along with Zamyatin, Bulgakov’s novels are increasingly credited with bringing about the atmosphere inside the former Soviet Union which led to Perestroika and Glasnost. The Bulgakov Project, still untitled, aims to capture the essence and soul of Mikhail Bulgakov and his time by digesting and reconstructing images and passages from his life and works in the hope to create a dialog between present audiences, Bulgakov and his world, and the history of civilization. The piece is both biographical and fictional, dwelling in a realm that transcends reality through imagination. It explores the aspects and themes related to artistic censorship, socialistic abuses, limitations on one’s personal freedom and space, and the complexities of the inner mind’s ability to cope with such surrounding constraints. It is about the power of words over the power of guns, the strength of the imagination over the strength of terror. ARTEL will combine various performance disciplines, centering around the mediums of song, rhythm, body, movement, and text, to create a sensorial experience that strikes an audience on a visceral as well as imaginative level. Text will not be the sole mediator between the performer and the audience, instead, the performance will have an underlying structure based on the performers’ bodies, finding the precision of physical action and physical forms, along with select costumes and set pieces, to create images and atmospheres that will provoke the familiar to become mysterious. We intend to transform the space of the entire venue into the world of the performance by creating atmospheres that do not solely exist within the confines of a proscenium stage structure, but instead reach out to the entire audience to establish a heightened sense of engagement and experience.
Posted by ARTEL at 3:27 PM No comments: 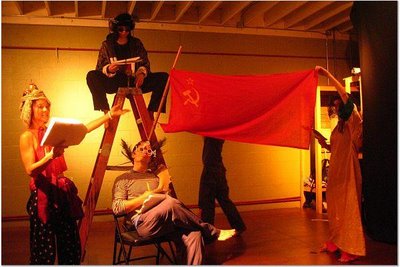 Artel began work on the Bulgakov Project (working title) on March 15, 2006. Ten artists dove into an investigation of Mikhail Bulgakov's life, writings, Russian history and culture, as well as examining those of America and the world.

Our process is collaborative: we co-create, we riff off each others ideas, impulses, we improvise, we discuss the final score, we present the work in progress. The final work will be a devised original piece of theatre based on Bulgakov. Artel anticipates presenting the project by the Spring of 2007.

Now: It's been almost 6 months, we come together 3 times a week. We dream to come together every day. The daily grind of jobs for survival will make us stronger. One day will own a farm.

Past: In addition to individual reading lists, we have collectively improvised, imagined the following plays (pictures are coming soon):
There are many others to cover, as well as those of Vladimir Mayakovsky, and possibly other playwrites of the time period.

Future: The next extensive work-in-progress will be presented in November in several rounds.